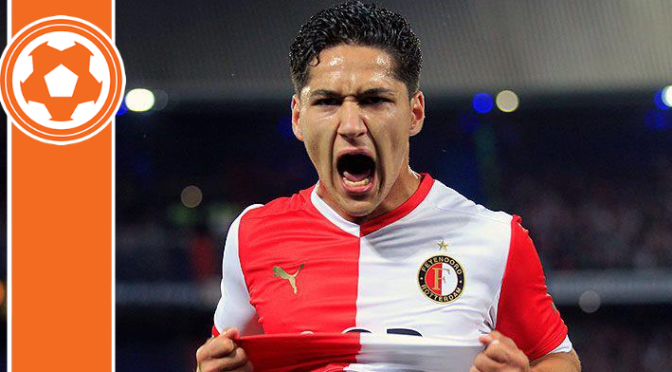 In the Dutch squad for this past summer’s World Cup, Feyenoord contributed more players than any other Dutch club.  A total of nine of the squad either had been a youth player trained and educated at Feyenoord at their famous Varkenwood academy, still played for them or had left to a club in another country.  Their names are Bruno Martins Indi, Daryl Janmaat, Stefan De Vrij, Terence Kongolo, Jordy Clasie, Robin Van Persie, Jonathan De Guzman, Leroy Fer and Georginio Wijnaldum writes Andries Oosterveen.

At the time of writing due to Holland’s excellent run at the tournament, the big clubs from some of the biggest leagues have already come calling. This has led to sad but inevitable break up of a Feyenoord side that I believe had a very strong opportunity to win the Eredivisie title, KNVB Beker and make an impact in the Champions League.

Ronald Koeman has left to coach Southampton with his brother Erwin Koeman in the English Premier League and has been joined by Graziano Pelle for a fee of €8m.  His goal to game ratio for Feyenoord was lethal and is certain to be missed though hopefully properly replaced. Daryl Janmaat made it three by joining Newcastle United for a modest fee of €5m.  The latest player to leave is the speedy versatile giant of a defender Bruno Martins Indi who has signed for FC Porto of Portugal in a €7.7m deal.  The latest rumour concerns young defender Stefan De Vrij and a possible €8m transfer to Lazio in Italy or a possible €10m transfer to Manchester United.

What is good however about the above transfers is that these players will move to highly competitive leagues with top teams who play top teams each weekend, are coached by world class coaches and are rarely out of European competitions.  The value of that in terms of their own personal development and different experiences is priceless and can only benefit the Dutch national team in the future and add another positive note and reference to Feyenoord’s highly successful Varkenwood youth academy.  There is also the funding for the new 75,000 capacity stadium that needs to be found and considered.

Yes, both Koeman and those players need replacing and the easy thing would be to buy outside of Holland like clubs in the Premier League do. However, this is Holland, where quality recruiting and youth player development has always been top of the priority list.  As a result Koeman´s replacement was chosen as Fred Rutten.

Rutten will also keep the Feyenoord playing style alive as the fans expect the players to work like they do, chase opponents down and play at a high intensity.  This would also be in line with the famous club saying of “Geen Woorden Maar Daden“ which in English means “Not Words But Deeds“.

In 2010, Feyenoord was almost made bankrupt which was the catalyst for them to turn to youth first before looking elsewhere to provide players for the first team squad.  There was no cash for new players so the youth academy was the main supply for the squad.  The academy is known as Varkenwood and has been voted now for the fifth year running as Holland’s best youth academy since 2009.  The head of youth development is Damien Hertog and the Academy manager is Rob Kurvers.  Proudly in May 2014, they again collected the Rinus Michels Award for this achievement.

The great story of Feyenoord’s Varkenwood youth academy was started by the great Stanley Brard who was a player at Feyenoord for most of his career.  In February 2006, he was appointed chief of the youth academy and in the 8 years since turned Feyenoord’s youth academy into the best in Holland.  Sadly Stanley Brard has now left Rotterdam to coach in Azerbaijan at FC Gabula but the success is continuing and the fanatical Feyenoord fans now have a homegrown team which is more than capable of achieving sustained success.

Besides appointing a new head coach, Feyenoord have in this month signed the experienced former Dutch international defender from Brondby in Denmark known as Khalid Bouhlarouz, who at 32, will add experience in defence, but recruiting from within to replace those sold is surely the priority as the success of Varkenwood shows.

In line with the great work being done at Varkenoord, here are some youth players to look out for and who could fill the void left by those already gone:

Ronald Koeman has described him as the perfect defender.  He made his Feyenoord debut this season.  As he is tall, fast and intelligent, he is seen as a natural defender and is potentially the best defender of the De Vrij, Willems, Veltman, Indi, Rekik, Bruma and Denswil generation.  His talents were noticed by Van Gaal and as a result he was included in the Dutch World Cup squad ahead of more experienced players.

A stocky striker, strong with the ball, lots of ambition and handy in the use of his body.  Roy Makaay, Feyenoord’s attacking youth coach was once told by Achahbar that Feyenoord should not sign Graziano Pelle as they had him.

Seen as a box to box midfielder in the Steven Gerrard or Patrick Vieira mould, he combines his technical abilities with a strong physical appearance.  He possesses offensive and defensive qualities and is able to nick the ball away and create danger with sharp crisp passing.  Former PSV coach Aad De Mos once called Vilhena the biggest talent in the Eredivisie.

A fast winger who combines speed with technique and creativity; he enjoys taking on right-backs with no fear and pressure.  He is consistently proving to be a rising star which was evident in his debut goal against Ajax in October 2012 with a composed finish.