While only scoring only eight goals in 44 appearances for Bundesliga side Borussia Monchengladbach after a €12m move two seasons ago, PSV have took a gamble on Luuk de Jong and handed the Dutchman the number nine shirt. 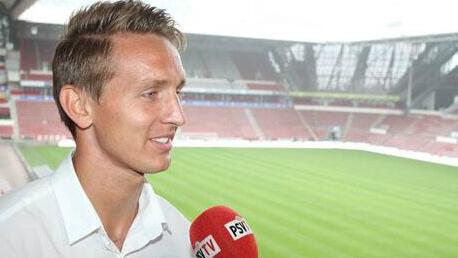 De Jong is back in Holland – Photo courtesy of PSV Media

PSV have signed the striker on a cut-price €5.5m deal, who put pen to paper to a five-year contract.

In addition to his unsuccessful period in Germany, De Jong went on loan at Premier League side Newcastle United in January and during his four-month spell he failed to score a goal in 12 Premier League appearances. However, he has a great record at home in the Eredivisie, scoring 39 times in 76 games over three seasons at FC Twente.

The 23-year-old, who was won seven caps for the Oranje, has now not scored a competitive goal in the past 12 months.

Talking to PSV.nl: “I want to get back onto the pitch and express my ability. The discussions with PSV were very positive and I’m really looking forward to playing here.”

Back in Germany, Gladbach’s sporting director Max Eberl speaking on De Jong’s departure: “PSV wanted to sign Luuk by all means and we were able to reach an agreement for this transfer. We wish Luuk all the best for his future.”