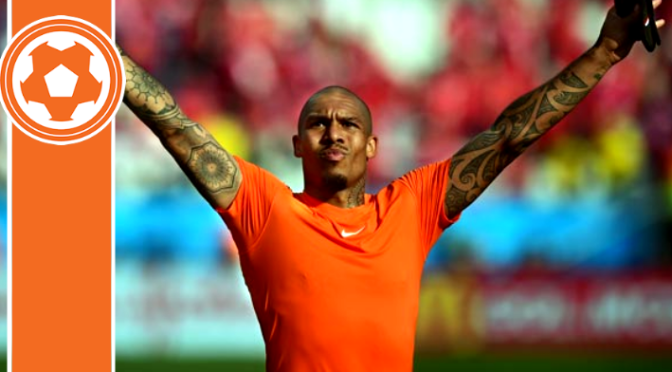 While Louis van Gaal has never needed much of an excuse to tinker with his formations and personnel, we are sure that he would prefer to have a full compliment of players available when he is picking his team heading into their World Cup semi-final against Argentina on Wednesday.

The good news on that front for van Gaal is that Nigel de Jong might have recovered in time from the groin injury that kept him out of the quarter-final clash with Costa Rica – a game that they subsequently won on penalties.

Early in the Netherlands last 16 meeting with Mexico, de Jong went down with a groin injury and the worst was feared. The initial recovery time was two to four weeks and the semi-final will only be 10 days since the original injury, so to say the chances are slim would be an understatement. But the fact that there is even a chance is a testament to the player and his commitment to playing for his country. That initial recovery time would have been enough to rule him out of the entire World Cup but the A.C Milan midfielder said recently that, “We will see, I will do everything in my possibility to start this game as it is only one game to the final.”

Having decided to stay with his teammates for nothing more than moral support, it is believed that his recovery is moving a lot quicker than expected.

The Dutch boss was forced to switch to a 3-4-3 against Costa Rica with two things being taken into consideration. The fact that he didn’t have as many midfield options as he might have liked, and the extra attacker might yield more against weaker opposition.

Georginio Wijnaldum and Wesley Sneijder played in midfield with Memphis Depay starting up front in the modified line-up but against Costa Rica. Against Argentina, however, a player like de Jong will be needed to curb any influence that Lionel Messi might have on the game and will more than likely man-mark him if that is the tactic that Van Gaal chooses to deploy as opposed to a more zonal based defensive setup. Pushing attacking threats deeper and deeper and away from goal is something that Nigel de Jong has carved a career for himself doing.

De Jong, who many feel didn’t paint himself in glory during the 2010 World Cup final with his infamous high tackle on Xabi Alonso, is eager to make it back to the same juncture of the competition with a different outcome this time.

De Jong has had somewhat of a resurgence during the World Cup and is now linked with a move back to England and Manchester, this time to the red half of the city. He played in all three of the Netherlands’ group games and was unlucky to have pulled up so early against Mexico but a possible return against Argentina would defeat all odds.