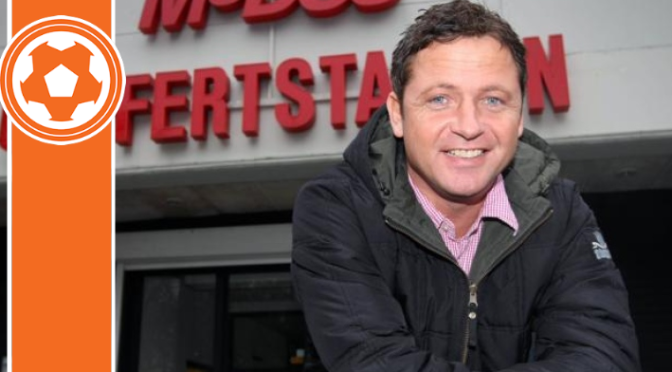 Last week, Scottish football writer Paul Dykes caught up with former Cambuur, Go Ahead Eagles, Dunfermline, FC Twente and NEC Nijmegen striker Jack de Gier to talk about his past football career on the pitch, on the touchline and how the Oranje will fare for the remainder of the World Cup.

It is now twenty-six years since the Netherlands blazed a trail around Europe as a new generation of Dutch masters emerged to win their country its first major football title.  Ruud Gullit’s ‘bullet’ header and Marco van Basten’s ferocious volley are burnt into the memory of every one of the 72,308 supporters who were in the Olympiastadion in Munich on that glorious day in June 1988.

One such fan was nineteen-year-old Den Bosch hopeful, Jack de Gier, who looked on from the terracing as Rinus Michels’ men overcame the Soviet Union 2-0 to win Euro ’88 and the former  striker recalls that iconic victory vividly: “The first competition I remember was the 1974 World Cup finals and Johan Cruijff was my hero from that time.  I was in Germany for the 1988 final, it was just before I started my career at Den Bosch.  Van Basten and Gullit were the masters; I will never forget the goals they scored.  We were celebrating for days!  The Dutch were in a flow that year, as PSV won the European Cup against Benfica.  I was brought up near Eindhoven so  PSV were my favorite team.”

As well as being a keen football fan in the late eighties, de Gier started to shine on the field and he soon inherited the number nine Den Bosch jersey from the departed Hans Gillhaus.  After three prolific years, Jack was on the move himself and the next homegrown goalscorer to fill his boots was none other than Ruud van Nistelrooy.

De Gier was transferred to SC Cambuur and it was whilst he was in Leeuwarden that he first worked with a Scottish coach who would leave an indelible impression on the Dutch marksman, as Jack explained, “I felt really good the moment Jimmy Calderwood became my manager.  He was involved throughout my whole career.  His enthusiasm and bluffing was what I liked.  His tactics were very offensive, which suited me.  He got the best out of me.”

After a brief spell at Go Ahead Eagles, Jack rekindled his association with Calderwood at Willem II, where they were reunited with ex-Cambuur colleague, Jaap Stam, before de Gier accepted an ill-fated transfer to Belgium with Lierse: “The team played very defensively and that was not my style so I left the club quickly.  There was contact with Saint-Étienne in France, PSV Eindhoven in Holland and Everton in England and I almost signed for PSV.  I was still in touch with Jimmy Calderwood and one week before the start of the league campaign, his striker did his cruciate.  Jimmy knew that I was unhappy in Belgium so he phoned and asked me to join him again at NEC Nijmegen.”

NEC and de Gier were a match made in heaven and he was quickly christened “Jackie Goal” by the Nijmegen supporters but Jack’s delight was short-lived as his mentor, Jimmy Calderwood, accepted an offer to join Dunfermline Athletic back in his native Scotland in 1999: “I was very disappointed.  I knew that Dunfermline had to get up to the Premier League and Kris Mampaey was a friend of mine so I started to look at their results.  I was desperate to play in England or Scotland because it was the way I liked to play.  Jimmy and I phoned each other just to talk and then he asked me to think about coming to Dunfermline.  He said the team and club would fit me.  I agreed and decided to come over and take a look.  When I came over in April (2001), I wanted to sign straight away.  I liked the town, the stadium and Dalgety Bay, where I looked for an apartment.”

Calderwood had already instilled a distinct Dutch influence in his squad with Michel Doesburg, Rob Matthaei and Marco Ruitenbeek having recently been acquired but the Pars had misfired during the 2000-2001 season and missed out on a top six finish in the Premier League.  When 32-year-old Jack de Gier arrived for a reported £300,000 fee in the close season, he was in no doubt about the task in hand, as he explained, “We wanted to finish in the top six and I had a goal to score a minimum of twenty.  Pre season was not good for me because I had a fever but when the league started I scored two goals directly (against Motherwell in a 5-2 victory).   I just wanted to be a member of the team and not only with the Dutch players.  Davie Nicholls, Nipper, Potts, Craw, Dan Dair, Little Bassie, Gary Mason, Fergie, Petrie… they were all great guys.  I had a really great time.”

After an emphatic opening day victory against Motherwell at East End Park, it looked as though Jimmy Calderwood had made a shrewd signing in Jack de Gier and Jimmy admitted last year that he had it in him to become a Dunfermline goalscoring legend.  The admiration is mutual, as Jack spoke of his four-time manager in glowing terms, “Jimmy made me feel good.  He was my second dad.  He knew best what I was capable of.”

Dunfermline went on to finish sixth in the Premier League that season as Calderwood continued to build a side capable of competing for major domestic honours but Jack de Gier did not hit his target of twenty goals, as he left Scotland after just fourteen appearances for the Pars.  His final act in a Dunfermline jersey was to grab another brace against Saint Johnstone, signing off at East End Park as he had begun just three months previously.  His five goals gave Pars fans a glimpse of what might have been but homesickness ended the all-too-fleeting Dunfermline career of a cult hero: “I had got used to the Scottish game and then unfortunately I had to move.  At that moment I was fit and I still feel bad that I left when I did.  FC Twente phoned me and paid a lot of money to Dunfermline for a striker of my age.  It was also good money for myself but the main reason I left was my son, Robbie.  I missed him so much.  When the move back home was close, I was sitting in the stand at East End Park.  It was cold but I was sitting in my shorts.  I didn’t want to leave the club but Robbie pulled me over.  I still regret that, not for my son but for my career.  I really missed DAFC.  I’ll never forget the proud supporters.”

Although Dunfermline made a profit on the sale of Jack de Gier, it wasn’t long before financial woes began to creep into the very fabric of East End Park, a situation that culminated in the club entering administration last year.  De Gier was saddened by events that almost buried the club he loves as he explained, “I’m still in touch with Nipper (Scott Thomson) and with Dan (Jason) Dair on Facebook and my contacts kept me informed.  The trouble started after I left and it was a problem for many years.  I was sad for everyone who has DAFC in their heart but all the supporters stuck together and didn’t let the club down.”

After his playing days ended, Jack de Gier moved into coaching with SVZ Wierden, FC Blauw-Wit Amsterdam and NEC Nijmegen and completed his Uefa Pro Licence last year.  He hopes that some day, he may even emulate his old comrade Jimmy Calderwood and travel back to Fife: “I still have DAFC in my heart and will never forget the great time I had.  The fans stay behind the club in good and bad times and together they will come back to the level they all deserve.  And if they ever want a Dutch coach who loves the club, they can just call Jackie Goal!”

Jack de Gier was born in the midst of the Total Football Dutch revolution and enjoyed watching its main protagonist using it to maximum effect in 1988 to win his country their only major honour to date.  Like many Pars fans, Jack is currently enjoying the action from Brazil in this summer’s World Cup Finals and he hopes a second trophy can be added to the international cabinet: “They have Louis van Gaal and that is all they need.  I was surprised by the 5-1 victory against Spain.  I think we can get to the final.  It will be difficult of course but we are the Dutch!  I hope I am celebrating on the canals in Amsterdam on the 14th of July.”