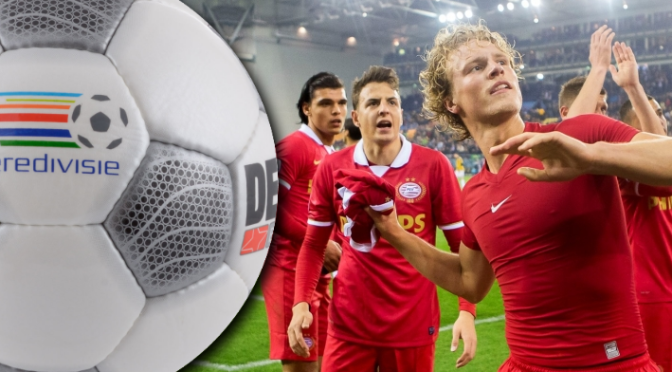 PSV extended their winning run to seven games in a row with a great 2-1 win away to Vitesse to lift the Eindhoven side up to third in the league, leaving Philip Cocu thinking… what could his side achieved this season without the mid-season blip he suffered before Christmas.

In a ferocious high-octane game where nine yellow cards were handed out by referee Kevin Blom, PSV defeated Vitesse 2-1 in the loud and raucous GelreDome.

PSV needed no inspiration for this fixture after suffering an embarrassing and heavy 6-2 defeat in the reserve fixture at the Phillips Stadion back in December, the Boeren headed into Arnhem looking for revenge. Cocu men’s exploded out of the blocks and got off to a great start after just six minutes.

Vitesse’s number one Piet Velthuizen received a back pass from Rochdi Achenteh and the experienced goalkeeper stuttered with his kicked clearance as Jürgen Locadia closed down. Velthuizen miss-kicked the boot up field and the ball fell perfectly for Locadia to tap the ball home. Not the start Vitesse manager Peter Bosz would have wanted.

PSV were relentless as they sensed Vitesse’s nervousness and on a six game winning streak and brimming with confidence, Cocu’s men pressed for a quick fire second. The usually composed Guram Kashia lost the ball to Locadia on the edge of the box but Memphis Depay unusually failed to get a shot off and let the Vitesse defenders recover and block any efforts on goal.

The hosts began to keep the PSV attacks at bay and calmed themselves down before former PSV midfielder Zakaria Labyad equalised on 19 minutes with a tremendous effort from outside the area. After Kashia laid the January signing on the edge of the box, the PSV defenders were too late in closing Labyad down and he curled his right footed shot past Jeroen Zoet.

Just before the half-hour, the visitors regained the lead in controversial fashion. After a great run down the left wing from Jetro Willems, the left-back was fouled by Jan-Arie van der Heijden in the area and Kevin Blom pointed to the spot. Replays showed that Willems had skipped Van der Heijden’s challenged but the defender trailing arm looked to brush the PSV’s man legs and Willems went down a tad easy.

Memphis Depay stepped up to the take the spot-kick and blasted his shot straight down the middle only to see his effort saved by the legs of Velthuizen. The rebound flicked up high to the back post where Ji-Sung Park headed the ball back across goal so Depay could nod home to make it 2-1.

Velthuizen and his defence protested as they thought that Depay was offside when Park’s header came back to the winger but video showed that the linesman may have made the right decision even though it was a close one. The GelreDome exploded in anger with spurred the home side on and they instantly pressed for an equalising goal.

After the break, the game continued as the first half ended with Vitesse on the all out attack. The defence of Santiago Arias, Jeffrey Bruma, Karim Rekik and Willems held strong and protected their goalkeeper Zoet well, blocking effort after effort, frustrating the hosts even further.

On the hour mark, both sides looked tired as the tempo died down and Depay was replaced by Luciano Narsingh as the young winger has caught an elbow from Renato Ibarra and was groggy as a black eye started to create on Depay’s face.

The game petered out as Vitesse pressed but hardly bothered Zoet in the PSV goal, apart from the odd cross that the Oranje goalkeeper assertively caught every time. They had their chances but Bruma and Rekik stopped any shot before it made to their stopper in goal.

In the dying embers of the game, substitute Lucas Piazón had a glorious opportunity to snatch a point for his side but fluffed his chance as Philip Cocu celebrated his seventh win in a row on the touchline.

PSV temporarily move into third with just two points off Vitesse in second but Twente or/and Feyenoord could leapfrog them with wins in their fixtures tomorrow.

The in-form Bryan Linssen has now scored nine goals in his last nine games as he notched a brace to lead Heracles to a 2-1 win over the relegation troubled Roda JC.

Roda headed into Almelo with their first win in seven games last weekend against NEC and they started well with Guus Hupperts scoring his eighth goal of the season after quarter of an hour gone. The 21-year-old had the goal put on a plate from after Mitchell Donald combined with Berry Powel before setting up Hupperts to score.

Just before the interval, Heracles settle down their restless crowd with the equalising goal. After some great work down the left by Mark Uth, the ball was played into Bryan Linssen on the penalty spot to slot the ball past Filip Kurto to send the fans in at half-time happy.

With 12 minutes left remaining in the game, Linssen popped up with the winner after some slack tired Roda defending. Collecting Jason Davidson’s pass, the Heracles’ top scorer netted with a lovely calm low finish on the turn inside the area, giving Kurto no chance of stopping.

Jon Dahl Tomasson’s Roda sit down in the drop zone in 17th, five points adrift of safety with other relegation candidates Utrecht and Go Ahead Eagles still to play tomorrow. The win lifted Heracles up into 12th place, six points ahead of the bottom three.

ADO has got that ‘Fraser’ feeling as caretaker manager Henk Fraser has now lead his side to three wins and three draws in his six game in charge and has now surely lead the club out of relegation trouble with today’s 2-1 home win over ten-man FC Groningen.

After a goal-less and dull first-half, it took an Eric Botteghin sending off to liven up the game just past the hour mark. The Brazilian was penalised for pushing Ronald Alberg down while through on goal on the counter. It was a terrible error by referee Reinold Wiedemeijer as he awarded a penalty for the foul but the contact was made well outside the box. Ronald Alberg sent goalkeeper Marco Bizot the wrong way to open the scoring.

On 77 minutes, Groningen’s 17-year-old striker Richairo Zivkovic restored parity with a great strike after Filip Kostic had put the youngster through on goal with a ball over the top of the ADO defence. The youngster set to sign for Ajax in the summer had a ineffective game in the lone striker role before finding the net.

Dion Malone grabbed a 89th minute winner to give the hosts breathing space in their battle for survival. Alberg chipped the ball into Malone’s bearing down on goal for the finish.