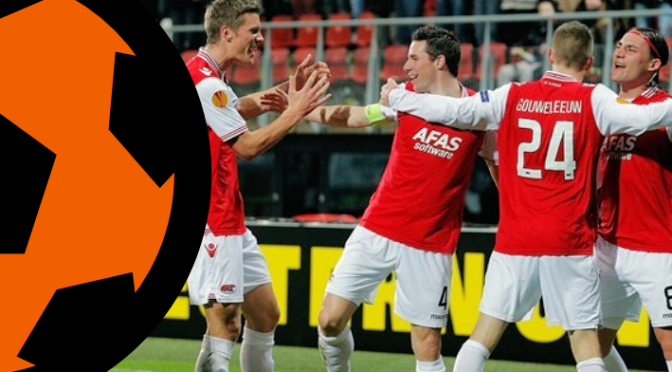 Ajax are eliminated after tasting another defeat at the hands of Red Bull Salzburg, meanwhile, AZ Alkmaar held Slovan Liberec to a draw to continue on into the Last 16.

Ajax ended up conceding another three goals to crash out at the expense of a far superior Red Bull Salzburg side over the two legs. The Austrians now go on to face a last 16 tie against Swiss champions FC Basel.

Salzburg coach Roger Schmidt named an unchanged side that inflicted a 3-0 defeat onto Frank de Boer’s side last Thursday. As the Ajax coach saw the game as an opportunity to rest some players for Sunday’s De Klassieker. He left usual central defensive pairing Joël Veltman and Niclas Moisander on the bench with Mike van der Hoorn and Stefano Denswil starting.

The hosts dominated the early proceedings and had a golden opportunity to go in front after just 11 minutes in. Brazilian striker Alan lofted a perfect ball over the Ajax defence as Kevin Kampl beat the offside trap with a wonderful run. Bearing down on goal with the ball still bouncing, the Slovenian midfielder defeated the on-rushing Jasper Cillessen with a chip. Unfortunately for Kampl, the ball bounced back up onto the crossbar as Denswil headed the rebound away.

The Austrians kept pressing and in the 17th minute, Alan should have given Salzburg the lead. The Brazilian scored a second-half hat-trick at the weekend against Admira, but after he was put through by a defence-splitting Christoph Leitgeb ball, the striker dragged his shot wide.

Ajax has created their first real chance on 22 minutes after some good work down the right wing from full-back Ricardo van Rhijn. The Dutch international whipped a great ball in for Kolbeinn Sigthórsson at the front post, and after the Icelander got in front of Andre Ramalho, goalkeeper Péter Gulácsi tipped the ball wide.

Salzburg full-back Andreas Ulmer was causing trouble down the left and on 35 minutes, he flashed a shot across the goal from an acute angle after outsprinting Christian Poulsen. Minutes later, at the other end, Lesley de Sa in a similar move, forced a save out of Gulácsi but eventually the teams went in at half-time goal-less.

Ten minutes after the restart, the scoring opened and it was an unfortunate own goal from Mike van der Hoorn. Jonathan Soriano, smashed a low cross into the box and the big defender tried to cut it out but diverted it straight into Cillessen’s path. The Dutch international goalkeeper failed to get a grip of the ball and spilled it into the goal to give Salzburg the 1-0 lead.

The lead was doubled ten minutes later with Sadio Mané latched on yet another Leitgeb through ball and due to Denswil giving the Senegalese striker far too much space, he sprinted on and finished past Cillessen in style. The young defender should have been a lot sharper and tighter to the striker.

In the 77th minute, Jonathan Soriano could not miss after he laid on a plate by Mané. After Ulmer had robbed De Sa of the ball high up the pitch, the left-back played in the Senegalese striker who fired a ball to the back post where the Spaniard could tap home with ease. All too easy for Salzburg.

Davy Klaassen notched a consolation goal for the Amsterdammers but it they were once again swept away by the Austrian Bundesliga leaders. A bad result for Dutch double as their strongest team head of the competition at last 32 stage.

De Boer will now head to Rotterdam on Sunday to face Ronald Koeman’s Feyenoord, who will have seen more weaknesses unveiled by Salzburg to prey on.

Dick Advocaat’s AZ Alkmaar had no problem reaching the last 16 with another win over Czech side Slovan Liberec. Alkmaar will now face a two-legged affair with Russian side Anzhi in the next round, as the last remaining Eredivisie side in European competition this season.

Advocaat’s side dominated early proceedings and should have been a goal to the good in the first 15 minutes when Etienne Reijnen emerged down the right but his pass was blasted over the crossbar by US striker Aron Jóhannsson.

The hosts took a 19th minute lead with Nick Viergever, scorer from the first leg, notching again. The defender lost his marker to nod home a Nemanja Gudelj corner to give his side a 2-0 aggregate lead.

Yevhen Budnik scored from close range on 77 minutes to level the game up, but the Czechs were unable to find a late winner to progress onto the last 16.