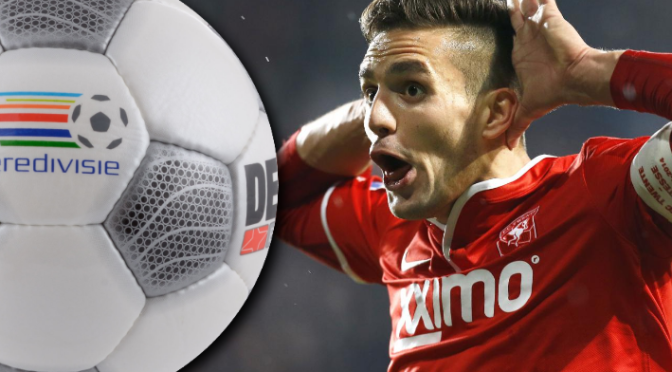 FC Twente defeated Vitesse to narrow the gap down between themselves and Eredivisie leaders Ajax to one point, albeit temporarily as Ajax are set to play Heerenveen on Sunday.

Twente dominated the game throughout and Kelvin Leerdam, playing at right-back for Vitesse, did not make it easy for his team after just four minutes when he was shown a yellow for a foul on Quincy Promes. Leerdam was making his first appearance after serving a suspension.

The hosts should have taken the lead many times during the first-half but even more so on 13 minutes. Vitesse goalkeeper Piet Velthuizen passed the ball out of the box to Marko Vejinović, but the midfielder was under extensive pressure and the ball was stolen in a dangerous position by Luc Castaignos. The striker dished the ball out to Dušan Tadić, who returned the ball to Castaignos inside the area but the 21-year-old’s shot was straight at Velthuizen legs.

The attacks from Twente were relentless and Tadić nearly got on the scoresheet a minute later with a great low drive from the edge of the area but the shot was just wide much to Velthuizen’s relief. On 36 minutes, the Serbian was involved again. After some great link-up play between Tadić, Castaignos and Roberto Rosales ending with the Serb blasting a shot from close range but Velthuizen stayed strong and saved his side yet again.

Vitesse struggled to get involved and were restricted to just one shot on target within the game but Vejinović’s rare chance came close in the 37th minute. However, the midfielder’s strike from 35 yards out was inches wide of Nick Marsman’s left post.

Michel Jansen must have been wondering how his side was not in the lead come the half-time whistle especially after missing a glorious chance three minutes before. Jan-Arie van der Heijden was caught in possession by Shadrach Eghan and the Ghanaian spotted a Kyle Ebecilio run in the area. Ebecilio was under pressure from Guram Kashia and the Georgian defender did just enough to direct the former Arsenal youth’ shot into Velthuizen’s arms.

The first goal finally came ten minutes after the interval. Luc Castaignos outpaced Leerdam to latch onto a Dico Koppers through ball and the striker made no mistake this time, calmly finishing past the onrushing keeper.

On the hour mark, the visitors were reduced to ten men as Chelsea loanee Patrick van Aanholt tackled Tadić from behind and was shown a straight red from referee Pieter Vink.

The chemistry between Tadić and Castaignos is growing game by game and with twelve minutes remaining the two combined to double the lead and seal the points for Twente. The two exchanged a wonderful one-two leading to Dusan Tadić wonderfully chipping Velthuizen with great composure. The Serbian is truly to most valuable player in the Eredivisie right now with four goals and four assists in the six games in 2014.

The win means Twente are just a point away from leaders Ajax as Vitesse are now without a win in five games and Peter Bosz must be feeling that the challenge of the club’s first ever Eredivisie title must be out of reach now.

Anton Janssen’s NEC came back from conceding an early goal to earn a vital 3-1 win at RKC Waalwijk, this was the Nijmegen’s side first league victory on the road this season.

NEC nearly took the lead within the opening few minutes after a great move by Alireza Jahanbakhsh and Kevin Conboy. The Iranian laid the ball into Conboy who chest passed it back to the 20-year-old winger but his sliding effect crashed off the post.

The hosts took the lead on six minutes with Romeo Castelen’s fourth goal of the season. Kenny Anderson and Daniel de Ridder combined until the ball fell perfectly for Castelen to hit a low drive past Swedish keeper Karl-Johan Johnsson.

The visitors were close to equalising minutes later but Conboy’s effort was tipped onto the bar by Jan Šeda. However, Janssen did not have to wait much longer to see the game turned around for his side.

After a long free-kick from deep was nodded down by English striker Michael Higdon on 25 minutes, Navarone Foor was on hand to finish from close range. With six minutes to go before the half-time whistle, the visitors took the lead. Club captain Ryan Koolwijk launched a free-kick from the left which met Lasse Nielsen’s glancing header at the front post to make it 2-1.

After the break, the points were almost cemented on 54 minutes. A corner from Koolwijk was headed by Jahanbakhsh, and the Iranian international flicked his effort towards goal, but it took a deflection off Evander Sno and onto the crossbar.

The win was clinched by Michael Higdon on 71 minutes to give NEC a great away win. Combining down the right, Jahanbakhsh and Søren Rieks crossed in for the Englishman to mishit a volley which ended up in the goal anyways.

RKC drop to 13th just two points off the relegation places with NEC lifted out of the drop zone into 15th.

ADO enjoyed a narrow 1-0 victory with Roda coach Jon Dahl Tomasson facing an uphill struggle to keep his side up as they sit rock bottom of the league.

In what was billed as a vital relegation battle, it was poor game in front of 14,000 supporters inside the Parkstad Limburg Stadion, which proved why both sides are at the bottom of the division. The fans endured a horrible first-half with no clear cut chances for either side.

The only excitement of the first 45 minutes came just before the half-time whistle when ADO were denied a penalty by referee Kevin Blom. Video replays showed that the visitors had a viable argument as Ard van Peppen had handled the ball in the area.

Mitchell Schet scored the only goal on 53 minutes, finishing a rebound from a Yanic Wildschut effort after Filip Kurto had blocked the original chance.

Kurto was called into action again with better consequences for him as he saved a Danny Bakker header minutes later from a great free-kick crossed in by Danny Holla.

With both sides desperate for points the action heated up with ten minutes to go. Substitiute Marc Höcher crossed for Mitchell Donald but his header was by goalkeeper Robert Zwinkels, filling in for Gino Coutinho.

In stoppage time, Roda should have clinched a point but Wiljan Pluim nodded his effort straight at Zwinkels feet.

The whistle was blown for full-time and Roda were roundly jeered off the pitch by their fans. The battle for ADO Den Haag is not over as they still sit third bottom in the relegation playoff places. Both sides are struggling to score goals and need to find some firepower soon otherwise they stand no chance of leaving the drop zone.

Dick Advocaat’s AZ Alkmaar missed out on the opportunity to move closer to the top five when they were held 1-1 by Jan Wouters’ FC Utrecht.

It was a quiet opening twenty minutes inside the AFAS Stadion and when the action livened up it was the visitors that nearly took the lead. Australian Tommy Oar whipped in a vicious free-kick that missed everyone and forced a great save from AZ keeper Esteban.

A minute later, the action went up the other end and produced a goal. Down the left Roy Beerens crossed into the front post where American striker Aron Johannsson met the ball with a diving header giving Robbin Ruiter no chance of saving.

Utrecht battled on and got back in the game with Steve de Ridder being the main threat testing Esteban on many occasions but failed to make a breakthrough.

After the break, Utrecht’s Jens Toornstra hit a perfect free-kick on 55 minutes to level the scores. Jeffrey Gouweleeuw fouled the tricky Oar on the edge of the area and Toornstra hit the resulting kick into the top corner with great precision.

The score stayed 1-1 even though Toornstra nearly repeated the act on 82 minutes but his free-kick was just too high for the target.

Utrecht coach Wouters, already under great pressure are now just two points adrift of the relegation spots and will look to get more points hosting FC Groningen next Sunday. AZ face a tough away trip to the Amsterdam Arena next weekend and could have done with the three points in this game to help their Europa League aspirations.