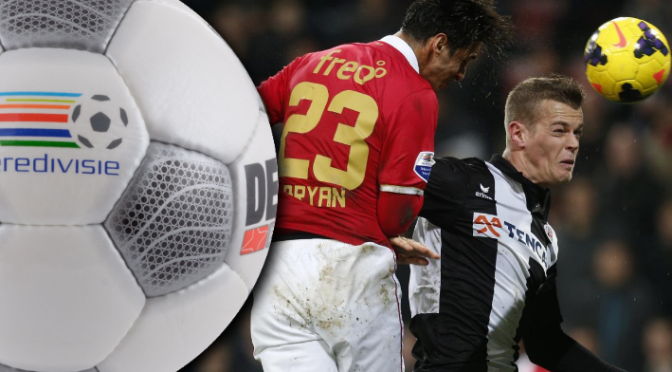 PSV clinched their third win in succession to sit in fifth place on Friday night after a gritty 2-1 win over the plucky Heracles Almelo.

The Philips Stadion pitch was in a terrible state due to heavy rain all day on Friday which left passing across the pitch very difficult, but it was an entertaining game.

The visitors though they had taken the lead after just four minutes of play, after Moroccan midfielder Iliass Bel Hassani had floated a ball over the top of the PSV defence to play in striker Mark Uth. Unfortunately for the German, on-loan from Heerenveen, the PSV high-line had caught him out and as the 22-year-old striker was smashing the ball past Jeroen Zoet, the referees’ assistant on his right had the flag up.

A minute later, the damp Eindhoven crowd were on their feet as their side took the lead. Memphis Depay latched onto a through ball from Jürgen Locadia and the young winger twisted and turned the Heracles defenders as he entered the box. After his first powerful attempt was parried by Remko Pasveer, Depay instinctively pounced on the rebound and coolly placed it into the corner out of the keeper’s reach.

The next twenty minutes or so turned into ‘The Memphis Depay Show’. Everything went through the twenty-year-old and although he is frustrating at times with his decision making, and easily annoys the PSV faithful, the player has clearly the skill and speed to go onto bigger things in the game.

After Depay tested the reactions of Pasveer a few more times, it was the turn of Zoet to be called into action on 23 minutes. The ball came out to Mike te Wierik on the right wing, and the defender whipped in a vicious looking ball towards the penalty spot. Awaiting the delivery was Uth again, he nodded a testing header towards goals, but Zoet came out on top and tipped over the bar.

Before half-time, the Heracles pressure paid off and Jan de Jonge saw his side level the score. The in-form Bryan Linssen was the goalscorer yet again, notching his seventh goal in his last seven appearances. After receiving the ball on the edge of the area, the midfielder spun onto his right foot, slipping the challenge of Jeffrey Bruma and lashing a right foot shot past the diving Zoet. The PSV ‘keeper had no chance of stopping. Linssen, a summer signing from the relegated VVV Venlo, will certainly being observed by some of Holland’s and Europe’s top scouts in this sparkling form, and may be on the mover again this summer.

Just past the hour-mark, PSV regained the lead and it was the on-loan Bryan Ruiz scoring his first goal for the club. The always impressive Jetro Willems attacked down the left-wing and got his cross past Te Wierik. The ball took a slight deflection and fell perfectly for the arriving Fulham man at the back post to nod home with ease.

PSV started to control the play but in the dying moments of the game they needed to rely on Zoet to clinch all three points. With just a minute of normal time remaining, the young goalie needed to pull off a tremendous double save denying Moroccan substitute Oussama Tannane first then saving Uth’s rebound with his legs.

Heracles should have gained a point in the final kick of the match when it was Zoet again to PSV’s rescue. Veteran striker Berry Powel, brought on as a late substitute, nodded the ball down in the six-yard area for Uth, but the German failed to connect properly and Zoet dived on the ball to save the game for the hosts.

Philip Cocu will be pleased with his side’s gritty performance and it is wins like this that may see them creep into the automatic European qualification places. PSV currently sit just six points off second place which is certainly not out of reach at this stage.

Heracles, on the other hand, sit in 11th place only seven points from the drop zone and will need to pick up some wins soon to steer themselves away from trouble.