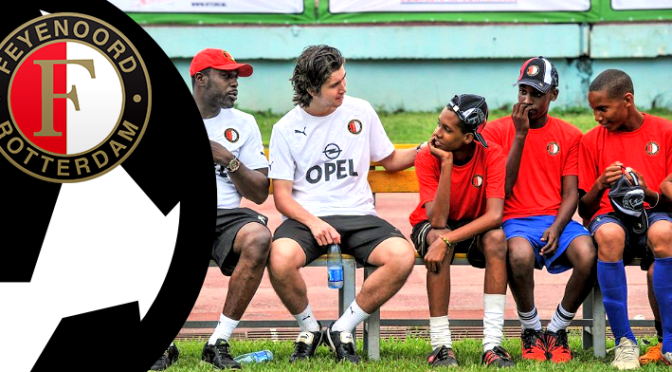 In the past stars like Ruud Gullit, Johan Cruyff and current manager Ronald Koeman have all being given their ‘big break’ at the Rotterdam club and went on to become Dutch footballing legends. The current crop of home-grown stars like Stefan de Vrij, Jordy Clasie and Tonny Vilhena are excelling and wowing scouts from some of Europe’s top sides.

In an interesting development, the Dutch side have branched out into the Caribbean in Havana, Cuba. The club opened up a five-day soccer clinic earlier this month, in the nation where the main sports that are watched and participated in are boxing, baseball and basketball.

Feyenoord sent two ex-players to Havana to run the clinic, former striker Robin Nelisse (from the Dutch Antilles) and ex-Oranje international defender Ulrich van Gobbel. Nelisse and Van Gobbel coached and scouted the youngsters with ages ranging from six to sixteen, looking to take anyone that catches their eye to Rotterdam on a trial at their youth academy.

With football not being big in the nation, Cuba has always struggled with qualifying for major tournaments and developing youngsters as the lack of investment in football has always been a problem. However, Nelisse was impressed with the youngsters he has trained and speaking to Sarah Rainsford of the BBC, he stated: ‘The discipline of the kids is really good, if you tell them something and they will listen and they work really good.’

A main problem for the two coaches was that although Nelisse and Van Gobbel can speak excellent English and basic Spanish, communicating with the kids was a challenge, but by a few days the kids were responding well.

The Cuban trainer at the academy, Alfredo Martinez stated that since the opening of the school in Havana, he has seen a vast important from the majority of the youngsters. Now that football is becoming more popular in the country, other sports are being dropped by the children in favour of ‘the beautiful game’ with the Spanish La Liga being the most watched league on Cuban television.

To gain some publicity and to help political relations with the communist country, Dutch foreign minister, Franz Timmermans was present on 6th January at the training camp. He is the first member of the Dutch government to ever visit Cuba.

Timmermans looked to the visit to strengthen political links between the Netherlands and Cuba. Timmermans said: ‘I am a strong believer in football diplomacy. I think that it is important that we increase the human contacts of Europe and the people of Cuba and sport is a fantastic way of doing this.’

One thought on “Feyenoord look to future Cuban talents”