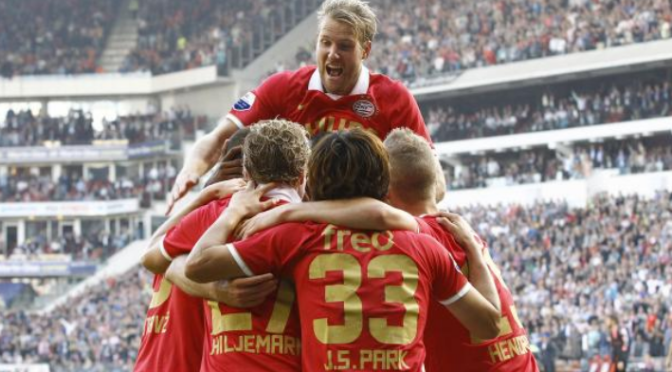 The scene was one of unbridled joy; with fans bouncing on the terraces and raising the Philips Stadion roof. After years of frustration at the hands of their greatest enemy, PSV had finally beaten Ajax in the league, the first time they had managed to do so since 2009. In emphatic style, the Eindhoven side demonstrated their true potential with a comprehensive 4-0 rout. It was a euphoric result. It was a warning signal to the Eredivisie. It was the greatest achievement of Phillip Cocu’s burgeoning managerial career.

In recent encounters with Ajax, PSV have let emotion destroy rationality. The magnitude of fixtures against de Amsterdammers seemed to bring about a cavalier attitude, with PSV overly-eager to earn bragging rights. When the two clubs met last season, Dick Advocaat employed a typically-offensive style which led to high-scoring affairs won by the more composed Ajax. It felt like PSV were lacking a solid foundation from which to attack, rushing forward with reckless abandon. In many ways, they were victims of their own desire.

However, the more pragmatic approach of Phillip Cocu proved to be a perfect antidote for PSV this time. Cocu is of a similar ilk to Ajax head coach Frank de Boer; the two sharing a similar career trajectory culminating in a coaching partnership with Holland at the 2010 World Cup. The dividing lines between PSV and Ajax are well-documented, but Cocu and de Boer have a lot in common. They are from the intellectual breed of coaches, who take an almost scientific approach to analysis and game preparation. Therefore, it was tremendously-exciting to see this subplot develop over the weekend.

In all honesty, Cocu outmaneuvered de Boer from a strategical standpoint, which is fine praise for even the greatest managers. The highly-successful de Boer is amongst the sharpest coaches in the game today, as illustrated by the succession of Eredivisie championships which he has masterminded. In recent times, PSV have lacked a manager to compete with de Boer’s new-wave ideas and philosophies. Fred Rutten wasn’t favoured. Advocaat was consumed by a love of goals. However, now it appears that, in Phillip Cocu, they’ve finally found a manager to compete with de Boer on every level. PSV’s 4-0 victory was the biggest league defeat inflicted upon Ajax in the de Boer reign, and may prove to be a portent of greater competition to come. It shows that PSV are serious again. It shows that Cocu, viewed as a figurehead of change, also has the tactical acumen which could lead to great things. It shows that de Boer may be facing his stiffest test yet.

For the first time in four years, PSV entered a heated game against Ajax with a discernible game-plan. It’s no coincidence that they won for the first time in that duration. As a spectator, it was clear to see that Cocu, along with impressive coaches Ernest Faber and Chris van der Weerden, had plotted a comprehensive plan as to how his side should deal with Ajax and win the game. It worked to perfection.

The first part of PSV’s plan relied on greater discipline than they’ve shown for a number of years against Ajax. It revolved around pressurising in sensible, important areas of the pitch and earning a right to play. Ajax are renowned for a slick-passing style, often beginning with goalkeeper Kenneth Vermeer and his ball-playing centre-halves. Thus, PSV directed a majority of their defensive energies to this portion of the field, closing down quickly and restricting any Ajax rhythm. The high-octane industry of Park Ji-Sung was instrumental in setting this standard, which is surely the type of impact Cocu envisioned when bringing the South Korean back to Eindhoven. Ajax were stifled by PSV in the areas of maximum importance around each penalty area, with only long-distance shots from Bojan and Ricardo van Rhijn really troubling Jeroen Zoet during a controlled first half.

Now, PSV had earned a measure of control, in much the same way we’ve become so accustomed to Ajax doing. After the break, Cocu saw the second part of his plan come to fruition. In a more prudent manner than recent years, the teams offensive spontaneity was unleashed. Memphis Depay broke into intelligent positions. Oscar Hiljemark began to probe forward from a central midfield berth. Even Jetro Willems broke into advanced positions when sensible to do so. In essence, PSV were using energy where it was needed, rather than wasting it in the all-out, gung-ho style of previous regimens. It gave them a more sustainable footing within the game. Eventually, Ajax were on the ropes.

The eventual flurry of goals even took Cocu by surprise; the manager fist-pumping in giddy excitement at the success of his plan. PSV went wild, scoring four goals in fifteen mesmeric minutes. When Ajax ‘keeper Kenneth Vermeer spilled an innocuous cross, allowing Tim Matavž to poke home the opener, it was symptomatic of that self-same pressing which so restricted the Amsterdam side earlier in the game; first Joritt Hendrix and then Memphis Depay working hard to force Ajax into uncompromising positions. The latter eventually wrestled back possession, whipped over a cross, and watched as Vermeer’s howler let Matavž in. Whilst the goal was somewhat suicidal from Ajax, PSV forced the issue so as to create such openings.

A scintillating breakaway saw Jetro Willems dance inside before bending a shot around Vermeer on the hour mark, before Oscar Hiljemark rapped one into the top corner and Ji-Sung Park completed the rout when through on goal. The blind fact of Ajax’s 4-0 thrashing was that they weren’t accustomed to seeing such a balanced, all-encompassing PSV. In many respects, PSV played like Ajax have for many years, taking an even-keeled, controlling approach with resourceful counter-attacks and searing breakaway goals. It could be said that PSV out-Ajax’d Ajax.

If you’re a PSV fan, this is a great sign. The future certainly looks bright under Phillip Cocu. After a disappointing performance and result in the Europa League against Ludogorets, it was especially pleasing to see such a rebound. When PSV most needed a strong performance, they were able to find one, helped by a mightily-impressive tactical plan from their exciting young coach. Now, as PSV look to drive towards the winter break as Eredivisie pace-setters, and as Cocu continues to gain deserved notoriety, the exciting times are back in Eindhoven. If a celebration is to be held in May, we may look back at this weekend, the 22nd September, as a seminal moment. It was when Phillip Cocu came of age as PSV manager.

One thought on “Cocu’s tactical masterclass”