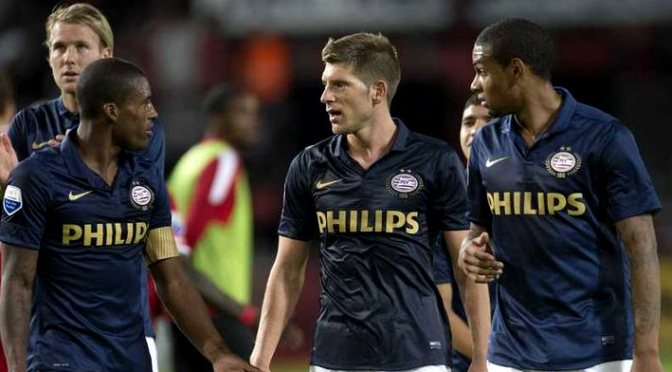 The Eredivisie returns after the international break and PEC Zwolle stay top even though they tasted their first defeat away to Ajax, as PSV stay second with a 2-2 draw at Twente. 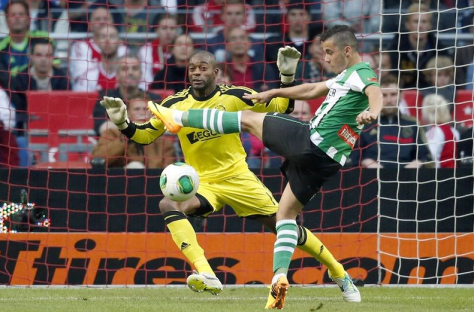 Ajax head coach Frank de Boer admitted that he was lucky to see his side come out of Saturday’s evening game with PEC Zwolle with all three points as he watched his side scored two very lucky goals.

De Boer played with a young eleven after the sales of Christian Eriksen and Toby Alderweireld before the transfer deadline. A new look strikeforce of Viktor Fischer, Danny Hoesen and Tobias Sana was the three-pronged attack with Siem de Jong and Kolbeinn Sigthórsson sitting on the bench, to be used if needed.

Ajax started the brighter and could have been ahead after 12 minutes if it weren’t for a superb point blank save by Kevin Begois in the visiting goal. Zwolle failed to clear a corner and new boy Lerin Duarte, recent signing from Heracles, whipped the ball in to meet the head of defender Stefano Denswil at the back post. Unfortunately for the defender, he placed his header into the hands of Begois who palmed the ball away.

It was visitors who created the next best chance on 36 minutes, and should have been ahead except for an offside decision that the TV replays proved to be incorrect. A Stef Nijland shot stung the hands of Kenneth Vermeer, and Mustafa Saymak rushed in and placed the rebound home, but the linesman had his flag up but the replays showed he was online with last defender.

De Boer and Ron Jans’ saw their teams head in at 0-0, however, three minutes before the whistle Zwolle should have had a penalty. Ricardo van Rhijn, who was given a torrid time by PEC striker Fred Benson, was caught on the camera pulling the Benson’s shirt inside the box. Benson stayed on his feet until the ball was cleared and fell down at the wrong moment, and referee Reinold Wiedemeijer waved away any appeals.

The game was hardly a classic and De Boer made a double substitution just after the hour mark. The returning Siem de Jong, previously out with a collapsed lung, arrived along with the on-loan Bojan replacing the uneventful pairing of Fischer and Hoesen.

Ten minutes later, we finally saw our first goal from South African international Thulani Serero. Fellow compatriot Kamohelo Mokotjo tried to clear the ball out the box but it fell to Serero. The young midfielder smashed a shot goalwards and Mokotjo was blocking the path of goalkeeper Begois and deflected the ball into the net. The Belgian keeper was not happy but it was an unfortunate goal.

On 76 minutes, Ajax doubled the lead in the same lucky fashion. A poor clearance from Begois fed the ball into the feet of Icelandic substitute Sigthórsson whom fired his shot against the foot of the post. The ball flicked up and hit Zwolle defender Maikel van der Werff into the chest which spiralled the rebound into the goal past the helpless Begois. On the sideline, De Boer shook his head instead of celebrating.

Earlier, Zwolle striker Guyon Fernandez arrived replacing Fred Benson and he nearly grabbed a goal back with six minutes to go. A great run allowed the on-loan striker to skip past Vermeer with ease, but his shot from wide was headed off the line by Denswil.

Zwolle got their consolation from a wonderful striker from yet another substitute Giovanni Gravenbeek. The ball fell to the Suriname-born defender on 89 minutes, just outside the box and Gravenbeek hit an outstanding right foot curler into the net smashing down from the underside of the bar.

The hosts anxiously held on for the final moments to dish out a first season defeat for Jans’ Zwolle side, before heading on a flight to Spain for Wednesday’s opening Champions League Group H game with Barcelona. On this performance, Lionel Messi and Neymar should not be troubled by the Dutch champions.

Cambuur’s impressive start to the campaign continues with a 2-0 victory over the poor Heracles Almelo.

After holding PSV to a 0-0 draw in the Philips Stadion before the break for internationals, the Eredivisie new boys started the game confidently but had to wait until 42 minutes to score their opening goal.  A cross from Oebele Schokker found the head of Michiel Hemmen before Heracles goalkeeper Remko Pasveer could get his punch to it.

Cambuur secured the win with just two minutes remanining when a Marcel Ritzmaier cross, on-loan from PSV, took a deflection off Jason Davidson, which looped over Pasveer to make it 2-0 late on.

Cambuur are now into the top half of the league, while Heracles lose their third game out of the six and sit 12th but after losing Lerin Duarte to Ajax in the window, this season could be a struggle for them. They will look to new signing Iliass Bel Hassani from Sparta Rotterdam to help them create and score the goals, but it is a big ask for the 20-year-old attacking midfielder.

A waterlogged pitch saw the postponement of Vitesse’s trip to Den Haag on Saturday evening, the game is yet to be rescheduled.

Philip Cocu’s PSV stay second in the league table after a 2-2 draw at FC Twente in Saturday’s late game.

The Eindhoven side nearly inadvertently took the lead early on after six minutes when a Joshua Brenet cross was headed off his own crossbar by Danish defender Andreas Bjelland.

Although, Twente looked the more dangerous of the two sides in the opening moments and took the lead on 17 minutes. Nineteen-year-old Shadrach Eghan layed the ball off on the right wing to Luc Castaignos and continued his run into the box. His marker, Stijn Schaars, left the Ghanaian midfielder unmarked and the youngster turned Jeffrey Bruma and fired past Jeroen Zoet.

The hosts could have been further ahead straight off the restart, when some shaky defending allowed Castaignos to fire a shot at Zoet. It was a firm stop by the young ‘keeper. On the half-hour, Zoet was tested again by a Dusan Tadic free-kick but held firm.

The visitors held the greater possession after the goal but and could not create any clear cut opportunities. On 32 minutes, Ji-Sung Park played Georginio Wijnaldum into the box but the midfielder’s shot was straight at Nick Marsman in the Twente goal.

After the break, PSV stepped up their game up, and moments after Memphis Depay had been denied a penalty and stung Marsman’s hands with a vicious shot from the left, he created the equaliser.

Depay surged down the left and swung in a beautiful cross into the back post where Wijnaldum was able to nod home unmarked from close range.

Head coach Philip Cocu introduced Zakaria Bakkali and Ola Toivonen off the bench on 66 minutes replacing Park and Adam Maher and straight away PSV should have took the lead. After a marauding run by Bakkali the ball fell perfectly at Wijnaldum’s feet in the box but he blazed the shot over the bar. It was a poor miss which PSV were made to pay for minutes later.

Tadic twisted Brenet inside out on the left wing and crossed deep for Castaignos to cushion a header into Quincy Promes, who volleyed his side into the lead from a few yards out.

PSV levelled with just seven minutes remaining with Memphis Depay cutting in from the left before firing a shot off defender Roberto Rosales which deflected past Marsman.

The game finished 2-2 and Castaignos and Schaars were involved in a shoving match after the final whistle. The big Twente striker had to be restrained by players from both sides and may be trouble from the KNVB after an investigation.

This is now PSV’s third league draw in succession and they will now entertain Bulgarian side Ludogorets on Thursday in their opening Europa League Group B game.

AZ ALKMAAR vs. GO AHEAD EAGLES