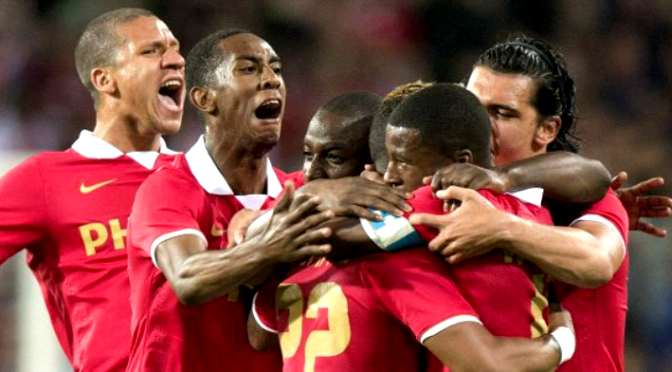 We’ve already learnt a great deal about the new-look PSV. After a summer of change in Eindhoven, Phillip Cocu looks to have assembled a young squad capable of competing for all domestic honours. As the club attempts to distance itself from a boom-and-bust transfer culture to one of organic development, fans are already beginning to see a very different PSV Eindhoven.

In the first instance, we’ve learnt that PSV will play some brilliant football and score some wonderful goals. The Champions League qualifier against Zulte Waregem proved as much; the youthful side producing some irresistible passing football en route to an impressive 5-0 aggregate victory, whilst capturing the attention of fans throughout Europe with a pair of memorable goals. In Eindhoven, Memphis Depay produced another twenty-five yard firecracker to give PSV the lead, before live-wire starlet Zakaria Bakkali sealed progression with an exquisite volley in Brussels. As Cocu’s side secured a playoff rendezvous with AC Milan, the spotlight began to shine brighter than ever on the prodigious talent of his young players. Even Zulte head coach Francky Dury couldn’t contain his admiration for PSV’s offensive style, stating that they “have a great team,” which plays “football of a very high level, the like of which we hardly know in Belgium.” Thus, PSV fans will be treated to a highly-entertaining brand of football in the season ahead, as played by a cast of extremely-talented youngsters.

The opportunity to watch this talent grow and develop will be an even greater privilege. In Jeroen Zoet (22 years old), Jurgen Locadia (19), and Memphis Depay (19), to name but three, they possess some of the finest Dutch prospects in the Eredivisie. However, the majority of column inches thus far have been devoted to the aforementioned Bakkali. At the tender age of 17 years and 196 days, the Belgian winger became the youngest ever player to score an Eredivisie hat-trick; his arrival on the senior stage announced with a trio of superb strikes against NEC Nijmegen on 10 August. As if such an astonishing feat didn’t lend itself enough to hyperbole, Bakkali was also selected for the Belgian National Team ahead of their friendly against France. When you’re seventeen years of age, weeks don’t get much better than the one Zakaria Bakkali has just experienced.

He was the youngest of a very young bunch during the NEC game. In their illustrious one-hundred year history, PSV Eindhoven have never fielded a younger starting eleven than the one which took the field that night. A team with an average age of 19.9 made captain Georginio Wijnaldum (22), and playmaker Adam Maher (20), seem like elder statesmen! After years of assembling teams with costly veterans and expensive gambles, it makes for a refreshing change to see such a homegrown PSV side.

It’s a conscious change. When unveiled as Head Coach in May, Cocu promised to “build a new PSV,” which will “invest more to help smooth the path for youngsters to the first team.” In hiring PEC Zwolle miracle-worker Art Langeler to oversee a philosophical change at youth level, and in promoting prospects like Bakkali and Depay to prominent roles, the club has acted swiftly to substantiate these promises. However, the project is still very much a work-in-progress. It’s only natural that PSV will encounter difficulty at points, with such an all-encompassing trust in youth. As the players acclimatise to the rigorous fixture schedule and become aware of the growing responsibility placed upon them, frustrations are sure to be felt. There will be periods of inconsistency. There will be over-exuberance and even indiscipline. There will be defeats. In the wider scheme, however, these growing pains will be worthwhile, as PSV attempt to change the culture by giving greater freedom to their players. The young prospects will develop and grow after learning from the inevitable mistakes. So will the club.

The opening Eredivisie game at Den Haag was perhaps the most honest reflection of what we can expect from PSV. In a pulsating first half, goals from Wijnaldum and Jetro Willems were sandwiched between a bizarre own goal, as PSV raced into a 3-0 lead. However, a hint of defensive naivety set in, with Den Haag pulling a goal back from a set piece shortly before half-time. After the break, the tempo was rather flat and PSV became a little sloppy in possession. When Den Haag capitalised on a lapse in concentration to make the game closer than it ever should have been, it was clear that the youngsters on whom Cocu will rely are still to master the nuanced art of closing-out victories. They still won the game, 3-2, but stoppage time was nervy when it needn’t have been.

In teaching the more gritty aspects of winning games and championships, the more experienced players will be vital to PSV. The return of Park Ji-Sung is a smart acquisition; the former Eindhoven favourite has abundant experience, and will be well-positioned to school the younger players in what is required when representing PSV. Cocu admits that overwhelming experience was a motivating factor in Park’s return, stating that younger members of the team will “gain from someone who has already played at the top level for so many years.”

Similarly, experienced midfielder Stijn Schaars will be a major cog in the PSV machine. A veteran of nearly 250 career appearances, Schaars is viewed as the reliable anchor of an otherwise mercurial midfield, chiefly responsible for maintaining concentration levels, closing-out tight games, and finding ways to win when the skills and tricks aren’t quite working. In finding a correct balance between this kind of experience and the dynamism of younger players, the essence of Cocu’s project becomes visible.

It’s a project which has the passionate support of PSV fans. The games thus far have been played in fantastic atmospheres; the Philips Stadion faithful understanding the need for change. At present, they are enjoying the thrilling emergence of a new generation, roaring and cheering louder with each step-over, each wondergoal, each victory. Along the way, there’s sure to be setbacks and growing pains, but the journey on which this enthralling team promises to take the fans of Eindhoven will rarely fail to fascinate.

2 thoughts on “A VERY DIFFERENT PSV”