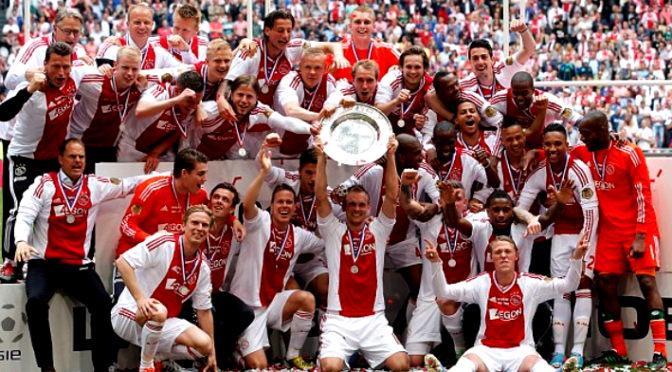 The 2013/14 Eredivisie campaign is ready to kick-off this Friday night with reigning champions Ajax beginning the defence of their league championship hosting Roda JC at the Amsterdam Arena. As per usual, the Dutch summer has seen the influx of richer clubs across Europe pilfering some of the best young talents from the league.

After signing a new contract extending his stay in Amsterdam until 2016, coach Frank de Boer heads into the new season looking to gain the fourth successive Eredivisie shield with some minimal changes. Veteran striker Ryan Babel has been shipped out to Turkey with Kasimpasa but other than that, no great losses in the title-winning squad. Out-of-favour Serbian midfielder Miralem Sulejmani has left for Benfica and fringe full-back Mitchell Dijks has been loaned to Marco van Basten’s Heerenveen for a season.

Arriving is the highly-rated striker, Bojan Krkic from Barcelona. After successful loan spells in Serie A with AC Milan and AS Roma, the 22-year-old starlet will look to take the Dutch league by storm. Joining him will be Jong Oranje central defender Mike van der Hoorn, 20 from FC Utrecht. Last season was Van der Hoorn’s breakthrough year in Utrecht, playing 44 league matches and scoring six goals.

It has been a case of all-change in Eindhoven with new head coach Philip Cocu starting a revolution of sorts at PSV, selling off many of the underperforming squad from last term and building his own team to challenge for the title this year. Out goes many of the players from the first team including the retiring captain Mark van Bommel. Two huge losses, but gained huge fees for the club are Dries Mertens and Kevin Strootman, who both head to Serie A to progress their careers. Also leaving the Phillips Stadion are: Erik Pieters, Jeremain Lens, Orlando Engelaar, Atiba Hutchinson, Wilfried Bouma and Boy Waterman. After the clear out, Cocu has looked to youth to start a crusade for trophies.

The new boss made a real statement stealing the signing of Adam Maher from under Ajax’s noses. Maher arrives after torturing his new club in the KNVB Beker final on 9th May this year, and his old club AZ Alkmaar ended running out 2-1 winners that day. PSV have never had the problem of unable to score goals but Cocu has bolstered his attacking options with the ultra fast winger Florian Jozefzoon arriving from RKC Waalwijk, and former PSV favourite Ji-Park Sung is due to be borrowed from Queens Park Rangers by the end of the week. However, most importantly, the defence has been strengthened by bringing in Jeffrey Bruma from Chelsea and loaning Karim Rekik from Manchester City. In the absence of Marc van Bommel, Cocu will look to Stijn Schaars to control play, win the ball then provide Maher, Georginio Wijnaldum or young prodigy Memphis Depay with chances on goal. Schaars joined from Sporting Lisbon for a combined €1.6millon fee long with 21-year-old Colombian right-back Santiago Arias.

In my opinion, I cannot decide on whether Ajax or PSV will win the title this year, but I am confident that these two teams will be the only two in the title race. However, Feyenoord are still a strong team and will look once again to the goals of Italian hitman Graziano Pelle to fire them up the league. Being able to persuade Jordy Clasie and Stefan de Vrij to sign new contract extensions was the major success of the summer for the Rotterdam club, but coach Ronald Koeman has not been able to add any new players to his squad.

Vitesse Arnhem, under the new leadership of Peter Bosz, have been heavily depleted losing their two biggest stars of last season Marco van Ginkel to Chelsea and Wilfried Bony to Swansea City of the Premier League. Right side defender/midfielder Kelvin Leerdam arrives from Feyenoord and Marko Vejinovic joins from Heracles Almelo as a free agent. Obviously, these two new signings will be hard pressed to replace the superstars that have moved on but with Gael Kakuta and Patrick van Aanholt returning on-loan from Chelsea, they will aim for a Europa League place. Norwegian target man Marcus Pedersen returns from a loan spell in Denmark with Odense, after having an impressive Under-21 European Championships with his home country.

FC Twente, like Vitesse, have cashed in on talent, with Nacer Chadli and Leroy Fer also heading to England, with Tottenham and Norwich respectively and contract-rebel Douglas finally departing for Dinamo Moscow. Twente are still looking to be active in the market until the window shuts but they have brought in defensive cover with Dico Koppers from Ajax, and midfielder creativity with Kyle Ebecilio arriving permanently from Arsenal.

Although losing Maher, the KNVB Beker winners AZ Alkmaar fared well this past weekend in their Johan Cruijff Schaal showdown with champions Ajax, narrowly losing 3-2 after extra time. The highly-rated central defender Jeffrey Gouweleeuw joins from Heerenveen and Serbian playmaker Nemanja Gudelj will look to replace the creativity of Maher in the side. AZ can fall into the category that could also press for Europe again this term.

FC Utrecht look in bad shape after their embarrassing two-legged Europa League qualifier defeat to Differdange of Luxembourg last week.  Joining on-loan from PSV, Belgian centre-back Timothy Derijck will try to fill the gap that Van der Hoorn has left in defence. Coach Jan Wouters has managed to persuade midfield star Jens Toornstra to stay at the club for now, with PSV sniffing around earlier this summer.

ADO brought in free agents Michiel Kramer, Ninos Gouriye and Ricky van Haaren but looking at the squad they lack a few players to push themselves up the league. Even though, Kramer scored 22 goals in 32 appearances for Eerste Divisie side FC Volendam last year, I find it hard for him to make an impact in the top flight.

Lack of funds in Almelo meant Heracles also dipped in the free agency to improve their squad including adding Ghanaian midfielder Matthew Amoah from Heerenveen earlier this week. Creative attacking midfielder Bryan Linssen arrives from VVV Venlo and is tipped to excel this season and may use the Heraclieden as a stepping stone to bigger things next season. Heracles lost Brazilian veteran striker Everton to Saudi team Al-Nassr and Vejinovic which will majorly hamper their chances of reaching great heights.

Marco Van Basten’s Heerenveen look to have the best opportunity to break through this term, especially after they clinched the signing of Magnus Wolff Eikrem from Molde. After the departures of Gouweleeuw (to AZ) and Filip Djuridic to Benfica, Van Basten excited the fans with the signature of the Norwegian midfielder, who was highly-rated back in his homeland and should suit the Eredivisie well. Winger Yanit Wildschut also joined from relegated VVV, and will add pace to the attack that has (so far) kept onto highly-sought Icelandic hitman Alfred Finnbogasson. In defence, Mitchell Dijks has been loaned from Ajax to gain some much needed first-team experience.

The new boys in the league this season are SC Cambuur and Go Ahead Eagles, like PEC Zwolle this time last year, they are heavily tipped to go straight back down. Zwolle defied the odds last term and finished a respectable 11th and six points clear of relegation trouble. Cambuur and Eagles will be aiming to emulate them and steer away from the Eerste Divisie. Also trying to avoid relegation will be NAC Breda, RKC Waalwijk, NEC Nijmegen and Roda JC.

Zwolle’s manager last year, Art Langeler has left to coach the youth team of PSV so he has been replaced by Ron Jans. Jans brought in Feyenoord pair Guyon Fernandez (on-loan) and Kamohelo Mokotjo (free) to try and improve on their unexpected great position last year.

One thought on “EREDIVISIE 2013/14 Season Preview”