Just the one extra game played on Monday tonight featured Dordrecht hosting Cambuur.  The visitors hit three times to move up to fourth in the Divisie and just two points off first place.

SC Cambuur grabbed maximum points for the third game in a row and now settle in joint third place alongside Sparta Rotterdam, although Henk ten Cate’s side has a better goal difference.

Cambuur took the lead just after eight minutes with Martijn Barto scoring the opening goal. With two goals from Erik Bakker, the team eventually coasted to a comfortable 3-0 victory. Bakker’s last was an injury time penalty. Dordrecht drop to eleven in the league table. 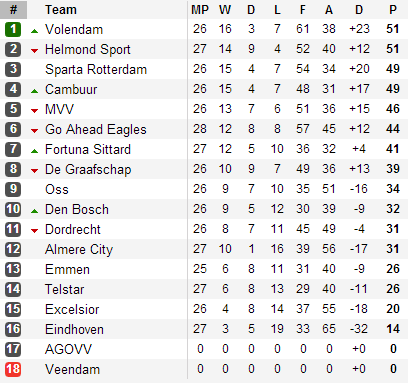