In the Eredivisie promotion race, the new leaders are Helmond Sport even though they did not have a game this week.  Of course, this was because the bankrupted SC Veendam were dissolved this week and all results were deleted from the league.  MVV were the worst victims of this dropping to fourth from second.

Sparta Rotterdam got back to winning ways under new manager Henk ten Cate with a 2-1 win away to Dordrecht. They went a goal down just before half-time with a Josimar Lima strike but Sparta came back out and turn the game around with goals from Iliass Bel Hassani and Danny Buijs. Ten Cate’s new side now sit in third, three points ahead of MVV, which failed to score against Go Ahead Eagles in a bore draw.

FC Volendam kept the pressure on the top with a good 2-0 away win to ten-man FC Emmen.  Jack Tuyp scored for the thiord game in a row with a 78 minute penalty after Ludcinio Marengo had given Volendam a early sixth minute lead. Volendam, although the victory, drop to second due to the deletion of Veendam’s results.

Cambuur, in sixth, are looking strong as they smashed four goals past FC Oss in a 4-1 home win. 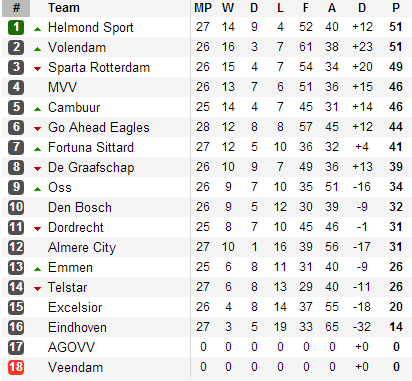