Volendam are creeping up on league leaders Sparta Rotterdam after they came out triumphant in their five goal thriller as Sparta failed in theirs. MVV also dropped points as Helmond Sport grabbed a win to stay in fourth.

Go Ahead Eagles 3-2 Sparta Rotterdam – The race for promotion to the Eredivisie has been blown wide open as Sparta Rotterdam dropped points in a 3-2 defeat away to Go Ahead Eagles. Luck was not on Sparta’s side on Friday night, as they found themselves two goals down after 33 minutes thanks to strikes from Marnix Kolder and Xander Houtkoop.  The second goal had a strong hint of offside which was not given.  The Rotterdam side grabbed one back in the second half just before the hour with a Sandro Calabro goal, but the two goal cushion was restored when Quincy Promes took a penalty for his thirteenth goal of the season. Sparta did manage a second goal with Roald Van Hout but they were unable to find a third to salvage a point.

Volendam 3-2 Fortuna Sittard – The hosts came from behind from an early 8th minute Joeri Schroyen goal, with the help of a red card. On the stroke of half time fortune grabbed Volendam as Jordie Briels received a direct red card and Michael Kramer got the equaliser. After the break, it was all Volendam and on the hour Jack Tuyp hit home a penalty past Fortuna ‘keeper Ferhat Kaya to take the lead. This was a celebration for Tuyp in his 300th game in professional football. The game was wrapped up a minute from time when Kramer struck his second and Abdelaziz Khalouta grabbed a injury-time consolation. Volendam now lie joint second putting the pressure on Sparta at the top.

Helmond Sport 2-1 FC Eindhoven – Helmond Sport were the victors of a close encounter in the Southeast Brabant derby over FC Eindhoven. Two goals in as many minutes for Helmond shocked Eindhoven with American Charles Kazlauskas and a spot-kick from Emrullah Gunvenc. On-loan PSV Eindhoven midfielder Maikel Verkoelen smashed a goal just after the hour in return.

MVV Maastricht 2-2 De Graafschap – Bryan Smeets hit a two-minute double as MVV came back from two goals down to grab a vital point. A Koen Daerden own goal gave the Superboeren the lead and Piotr Parzyszek extended it to 2-0 before the half-time whistle. Smeets grabbed two goals in the 51st and 52nd minutes for his hometown club.

Dordrecht 0 -1 Oss – Kenny Teijsse (loanee left-back from FC Utrecht) hit the only goal of the game in the 39th minute in this mid-table clash. 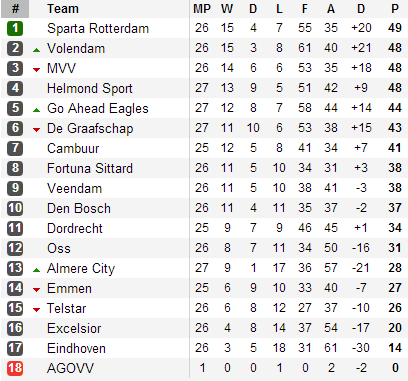